Oklahoma born singer David Reece is one of those voices in rock music, you’ll always recognize and remember. In 1989 he replaced Udo Dirkschneider in ACCEPT and recorded the „Eat The Heat“ album, which always was a love/hate thing, but became a highly respected metal classic nowadays. Reece voice also enriched albums of BANGALORE CHOIR, SIRCLE OF SILENCE, BONFIRE as well as Swedish GYPSY ROSE. Now, David Reece returnes with another masterpiece in his career, the self-titled debut album of the new founded quinted SAINTED SINNERS, playing classic hard rock with balls! „Sainted Sinners“ is an album full of magic, soul and power – or as they say: The pure essence of Rock’N‘Roll. We talked to Reece about his new baby, the past and the future.

David, how do you personally feel about the new SAINTED SINNERS album, which just came out. Did it turn out the way you wanted and expected it to be?

Greetings and thank you for taking the time to chat about my new group SAINTED SINNERS. I am feeling great, I’ve really tapped into something with this album, so I couldn’t be happier.

You just played the first live shows past weekend, how does the band work on stage, and how is the band chemistry like?

I have to work with good people, otherwise it doesn’t work for me. The talent inside SAINTED SINNERS is great. Malte, Ferdy, Frank, Berci and myself feel great together and we all share the same musical influences.

You also had Graham Bonnet (ex-RAINBOW) as a special guest on one of the SAINTED SINNERS shows. How did that happen and how did that turn out in the end?

I know his manager Giles Lavery and that’s how we put the show together. The show was very exciting, many fans loved the combination of us and Graham playing together.

From the musical side, SAINTED SINNERS is close to traditional hard rock and 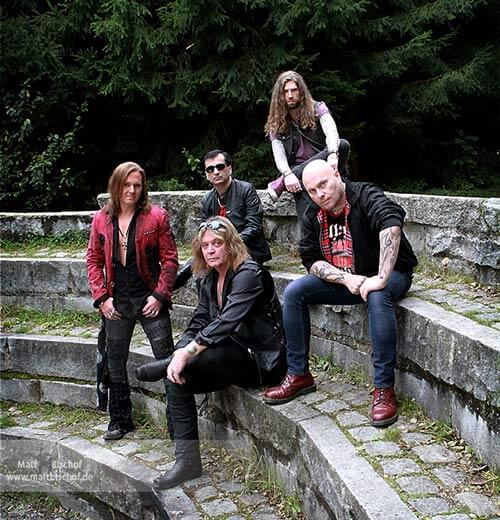 early metal acts of the 70s and 80s. Is this where you all feel being at home?

For me yes, music nowadays is very generic with no soul. Many project-bands have one songwriter, who writes, produces and releases the record to the label, so there’s multiple albums released with many of the same members, who aren’t really a band either. Some are very good, but I find everything sounds the same. SAINTED SINNERS is a real group, not a project! The style is very much… I am happy to say influenced by BAD COMPANY, WHITESNAKE and DEEP PURPLE, even LYNYRD SKYNYRD and ZZ TOP. Especially for me, it’s given a great platform to use my voice where it sounds and feels more sincere.

How was that like in your youth, how did you get into harder rock music?

I started listening to country music first, which I still love today. Rock struck me in the late 60’s, with LED ZEPPELIN, DEEP PURPLE and BAD COMPANY. I also sang in choirs as a boy.

Was there a certain artist or album that changed your life?

There’s been many! Country singers like George Jones, Johnny Cash influenced me very young. Rock singers like Gillan and Paul Rogers really gave me a rush in my soul, too. The new list of singers I like, are f.e. from RIVAL SONS, and blues singers like Adele – there is so much feeling in some of those people, they truely move me.

You became most known through the ACCEPT album „Eat The Heat“, which became a classic today, but was controversially discussed back then. Do you feel that this album gets more respect from metal fans today, than back in 1989 when it came out?

Yes, it’s a very strange thing?! When it was released, it caused a panic in metal, which I suppose I understand more today. But the last few years, many people write how they’ve gone back to the album and how they really love it now. I see it at many shows and sign it for people actually. I am very proud of that record.

You sang some of the ACCEPT songs when you toured with EZ LIVIN few years ago. Which of the songs did you sing in their set; and do you have a personal favourite from „Eat The Heat“?

I do „Generation Clash“ and „Hellhammer“ live, and we were thinking of playing „Mistreated“, because many people are asking for it. I love almost all of the record, so it’s hard to choose a favourite.

During the time with EZ LIVIN, you also joined BONFIRE and did two albums with them, which both turned out great. If you think back about the positive things with BONFIRE, what did you enjoy most?

Touring, simply that. I always wanted to actually play shows, but it’s very difficult to get live gigs now. So yes, my best feeling from them is the touring and getting my feet onstage.

Has it been the typical „personal issues“ that made you split with BONFIRE in july 2016?

For me it wasn’t a band, it’s not really Bonfire. Hans Ziller and his manager are the ones who are BONFIRE. Everyone is just a hired hand, who’s not anymore than that. I have to be respected and given creative space, personally and musically, and Hans doesn’t care about that. I am personally more free now and much much happier.

Right after this split, you founded SAINTED SINNERS, along with Frank Pané, who is still playing in BONFIRE. Did you became friends with him during your BONFIRE days, and was it clear that the two of you need to do something together?

We only became close towards the end of my tenure with BONFIRE, I never really knew how great of a writer he was until afterwards. Hans, like I said, uses riffs he had for years, and I only learned of Franks great talent when he came to my house after the split – and he asked to work with me. He played me one song, which turned into „Truth Is A Lie“ and we finished it in about 10 minutes! The rest of his music, I found so easy to write lyrics to. We have a very organic chemistry together, and most important, we respect each other. It’s really exciting, because we’re actually writing all the time, something Ziller and I never did.

Besides your connection to Germany, you also have a strong relationship to Sweden. You did the GYPSY ROSE album „Another World“ in 2008 and you created a fantastic album along with their guitar player Martin Kronlund, released as „REECE/KRONLUND“ back in 2011. Are you still in touch with each other?

Thank you! Yes, Martin and I are very close and I have many friends in Scandinavia. We’re booking shows there now for early fall 2017.

How do you feel about the future with SAINTED SINNERS, and what are your upcoming future plans?

We are signed to El Puerto Records for more than one album, as they believe in us and really have done an incredible job backing us. We’re here for more albums and touring. We’re doing well in Europe and in America, so we’re very excited for the future. We’re here to stay and you’ll be hearing much, much more! Thanks to you and all the fans worldwide.