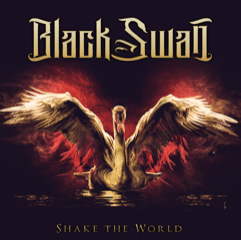 The band have now released “Big Disaster” as an official audio track on YouTube. Listen to the track off the upcoming album here: