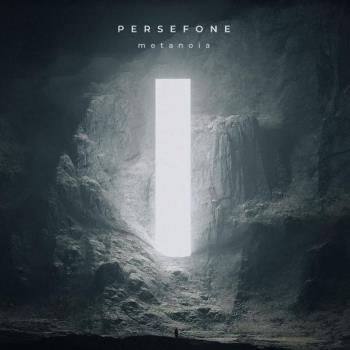 889 km is the distance approximately from Portugal to Andorra. It might just be as long musically between Kandia (whom I reviewed last) and Persefone.

Andorra, more than 200 km2 smaller than the UK but still here we find this little band named Persefone. Named after the daughter of Zeus and Demeter and the wife of Hades.
I hope that some day  the band become kings of the underground  and then take on the world but without ever changing musically.

A persistent 21 years and counting in the business they now release their sixth album “Metanoia” through Napalm Records. Having Einar Solberg performing the mostly instrumental first track isn’t it kind of waste of great talent. But the transmission from that song into “Katabasis” made me have an inner vision of a great two step show opener…And the song itself is such a steamroller so it can knock any doubter off their feet.  A hazardous hurricane coming at us with a fake calmness in their tail because just when you catch your breath/ you are swept away again.

Even the instrumental “Leap of faith” should not be missed. Mesmerizing in a way. “Aware of being watched” is a kind of a breather but they manage to have the listener on their toes if hell would be unleashed anyway, but not here.

Massive! A whole lot to take in during this hour of massive wall of sound.
You really need time to sort out everything that happens in the songs but I for one love it. A few bands who sound like this can on the other hand bore me, but these guys are solid and interesting all the way. When freezing black metal vocals can go hand in hand with pure death metal vocals singing along to a melody so catchy it feels so wrong and out of hand it still makes perfect sense. Then I can get along with almost one hour of sonic terror as this record is.
This album never lose interest. It was ages ago an album featuring songs over seven minutes kept up my interest.

“Consciousness (Pt 3) is Dream Theater swept in death metal prog clothes. Beautifully and almost unmarked turning into” Anabasis Pt 1” which is the song sadly leads us to the grand finale of an album I am having a hard time come to terms with except the feeling of wanting more. Strange but true.
Third part of Anabasis is just the perfect ending to a perfect album. An hour can feel like half a day. But in the company of those Andorrans, it felt like half an hour or less

A few bands who sound like this can on the other hand bore me, but these guys are solid and interesting all the way.

Alice Cooper to release ”Live From The Astroturf”

THE SPIRIT OF VINYL #3

Testament to play in Sundsvall and Malmö. Tickets on sale tomorrow!