One of the greatest things about the 1980’s is the huge spike of interest in dark fantasy and “sword & sorcery” imagery.  Think of all the classics of that era, movies like Conan The Barbarian, video games like Golden Axe, and of course the indispensable first six Manowar albums featuring Ross The Boss.

There is still a huge audience for dragons, swords and loincloths. Thus, there is still a huge audience for Ross The Boss. Therefore, a new album by one of the world’s most famous power metal musicians is very much a welcome addition, even though it’s released less than two years apart from 2018’s ‘By Blood Sworn’. Featuring a Daenerys Targaryen type woman with a chained dragon on the album cover, and song titles like ‘Glory to the Slain’ within, new album ‘Born of Fire’ proves to be another healthy helping of brawny fantasy flavored metal.

Since launching his solo band in 2008, the titular guitarist and his band are now at their fourth album. Clearly building up a sound and image of a band giving fans exactly what they’re expecting, this album is just like previous albums based on the mighty power metal rock that made albums such as ‘Hail to England’ so great. Like a Santana of power metal (and like all bands that are based around a lead guitarist as namesake) the main event will inevitably be the guitar playing. Ross The Boss clearly showcase the prowess of a player who has not been slacking off from practice. Some songs like ‘I Am the Sword’ and ‘Fight the Fight’ features raunchy Teutonic rock tones, reminiscent of modern Accept. Other songs like ‘Denied by the Cross’ reminds of the fluency of Glenn Tipton’s playing in Judas Priest. Album closer ‘The Blackest Heart’ ventures into Black Sabbath’s territory of slow and foreboding riffing, so there is a fair amount of variety in what is still a very consistent sounding collection of songs.

There is actually little to fault here, ‘Born of Fire’ is chock-full of fat riffs, juicy solos and big melodies. If you like Manowar, then this album should indeed be an enjoyable listen. Even though Ross The Boss left Manowar after 1988’s ‘Kings of Metal’, it’s still difficult to think about Manowar’s music without thinking of him and his contribution to the band and the power metal genre. Likewise, it’s even more difficult to think about Ross The Boss without thinking of Manowar, as he still champions the sound and aesthetics of those old glory days.

In a world of metal, magic and muscles there is only one Manowar… but there is also only one Ross The Boss.

Burning Witches – Dance With The Devil

Amaranthe and Beyond The Black announce European co-headline tour 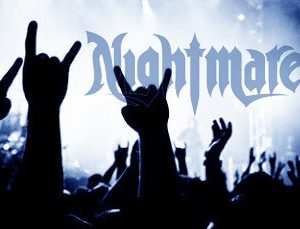